Of Warm Hands And Giving Twice 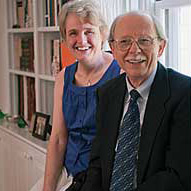 Wolfgang and Barbara Mieder have been generous donors to UVM over many years, including a major estate gift during UVM's last comprehensive campaign. "I think it was remarkable that we reached that goal, and that we had such good participation across the board from alumni, parents, faculty, trustees, staff and even students," says Wolfgang of the campaign.

Even so, he says it's the gifts that he and Barbara give to a variety of causes and organizations in the here and now that give the most satisfaction.
"I think it's the joy of participating in giving while you are part of it that I find special," Wolfgang says. He recalls fondly the expression "Giving With Warm Hands," the title of a talk on philanthropy that the late Warren McClure gave some years ago. "The idea is, to do something while you have the pleasure of seeing the result of your philanthropy."

"I think everybody has some philanthropic interest," he continues. "It's just a matter of deciding where your priorities lie, and one of ours is to give to education."
Wolfgang is professor of German and Folklore in the Department of German and Russian at UVM, which he chaired from 1977 to 2008, and is nearing 40 years of service with the University. Barbara is a long-time teacher of German and Latin at Milton High School.

With both of the couple in the teaching profession, offering their support to a number of educational institutions is a natural. "We've always been committed to supporting education, says Barbara. "We feel we can make a difference."

A volunteer for numerous community-focused activities in Vermont, Barbara says the couple's philanthropic support is tied to their love for Vermont. "Vermont is a special place, and it behooves us to do what we can" she says.

Hailed by Smithsonian magazine as "the world's top proverb expert," Wolfgang has a proverb at the ready when the subject is giving. "There's a famous, classical Latin proverb, bis dat, qui cito dat, which means ‘who gives fast, gives twice.' It's a wonderful rule for philanthropy."